The 82 Division of  Nigerian Army, Enugu arrested a fake soldier and also smashed an electricity cable syndicate that operated in Nsukka area of Enugu State yesterday
The General Officer Commanding (GOC) of the division, Maj.-Gen. Lasisi Adegboye,who addressed newsmen on the recent feats made during the “Exercise Atilogwu Udo 1”, said the suspects were arrested by troops of Sector 5 within Enugu State.
According to the GOC, the suspect was in a vehicle conveying egg plants from Abuja to Abia and he was given a lift by the driver of the vehicle he boarded because he claimed to be a soldier.
Items recovered from the suspect include Nigerian Army Identity Card, a desert camouflage T-shirt, two camouflage T-shirts, a pair of camouflage shorts, one mobile phone and the sum of N40,000.
Other items found in his possession include fake N1000  notes, one Japanese Yen, a toy pistol, fake Nigerian police identity card, 26 Nigerian Army vehicle stickers, 23 Army emblems, one pair of desert boots, two engineer cap badges, a name tag bearing Madukwe O.I. and a jackknife.

Quote
“ the suspect obtained a National Diploma in Computer engineering from the Nigerian Institute of Technology and Environmental Studies, Makurdi.
“It was further revealed during his confessional statement that he was on his way from Abuja to Aba for the purpose of committing robbery and he produces some of the military accessories found on him.”

Adegboye disclosed that troops of sector 5 on patrol on Wednesday at Opi near Nsukka were tipped off by locals of 3 criminals suspected to be involved in the act of stealing cables in the town.
the GOC disclosed that

Quote
“A pursuit by our troops led to the arrest of one of the criminals Ifeanyi Agbaraenyi, while the other two fled on sighting our troops,”

He said preliminary investigation revealed that the criminal came from Udi, Onitsha and Enugu.

Quote
“However, his attempt to bribe the soldiers with the sum of N700, 000 was stiffly resisted by the soldiers,”

Adegboye posited.
The suspects were later handed over to the police for further investigation and prosecution. 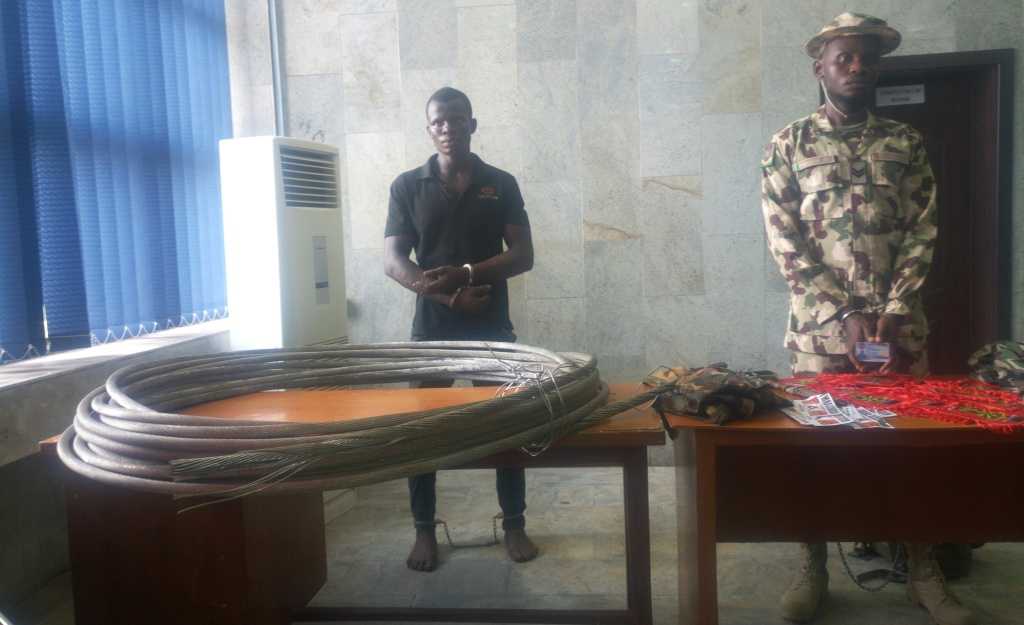