One of the suspected cases of coronavirus who attended and interacted with Nigerian celebrities at the AMVCA 7th edition has been disclosed.

The report gathered revealed that the man who flew in from the United Kingdom showed symptoms of coronavirus, and he has refused to get himself tested.

Now, the said guy, identified as Seun O, has confirmed that he has been feeling unwell since Sunday, March 15, barely a day after self-isolating.

Seun disclosed that he was referred to the Lagos State Government after he went to Lagoon hospital in Victoria Island to get tested.

He also confirmed that screenshots of a Whatsapp chat which has gone viral online were a conversation he had with a friend. 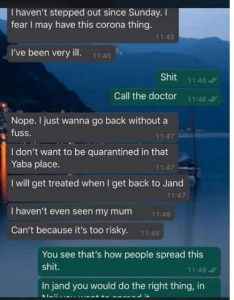 Osinbajo Speaks On When Land Borders Will Open

How Biafra, Oduduwa, Kwararafa Republics Will Be Actualized – Nnamdi Kanu

Magu Kicks As Malami Fails To Appear Before Presidential Panel

NYSC Gives Update On 2019 Batch ‘C’ Stream I Passing Out

Sacked As APC Chairman, ‘Dethroned’ In Edo — What Next For Oshiomhole?

Osinbajo Speaks On When Land Borders Will Open