Stakeholders in the zone have also called on government to urgently address the situation before things get out of hand.

Most of the respondents who spoke with NAN attributed the astronomical increase in the prices of foodstuffs to effects of the COVID-19 pandemic.

Others however, attributed the trend to increase in transport fares, caused by the recent increase in petrol price and the inability of farmers to produce enough food for domestic consumption, while the nation’s borders remain shut.

With respect to retail prices, four small pieces of onions, which were N50 in October are now N200.

Mr Saheed Ismaila, a yam seller at the popular Shasha market in Akure North Local Government Area of Ondo State, said five pieces of medium yam tubers, which were sold between N1,500 and N1,800 in October, are now between N2,500 and N3,000.

“We are selling based on how much we bought the item. We usually travel to Minna and Abuja to buy them and we have to add the cost of transport, hence the price increase,” Ismaila said. 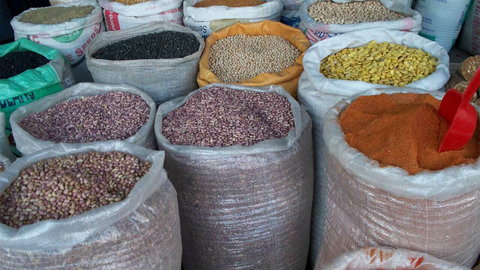 “Only God knows what the future holds for foodstuff prices in the country,” Adams lamented.

Although, the commodity increased to N12,000 shortly after the pandemic, it is now sold for N14,000 in most markets in Ogun.

At the popular Kuto market in Abeokuta, a bag of beans, of which the price fluctuated between N19,000 and N23,000 in October, is now sold for N28,000, while a plastic measure of the foodstuff has increased from N350 in October to N550 in November.

The survey however, revealed a downward trend in the prices of garri, tomato and pepper in some of the markets.

At Agbeni market in Ibadan, a wholesale trader, Mrs Michael Abimbola, said a bag of onion, which was sold for N12,000 at the onset of coronavirus in March, is now N30,000, while price of a bag of beans has increased from N15,000 to N30,000 within the same period.

Abimbola attributed the hike in prices of the foodstuffs to fuel price increase, poor infrastructure, and lack of adequate rainfall in the year.

“For onion, which is being brought from the North, it takes transporters like a week before reaching here (Ibadan) and they have to fathom the transportation cost into the price,” she said.

The Chairman, Onion Sellers’ Association in Oyo State, Alhaji Adeola Azeez, advised that government should provide modern storage facilities for preserving onions in the country to prevent frequent scarcity of the commodity, particularly during off-season.

Azeez, who is the leader of onion sellers at Shasha Pepper Market in Ibadan, attributed the hike in prices of most foodstuffs to climate change and insecurity in many states of the North.

Mrs Omobonke Adunola, a tomato seller at Bodija market, Ibadan and Mrs Munirat Akinade, a housewife, decried the rate at which prices of foodstuffs kept going up in the last one month.

A civil servant in Ibadan, Mr Olusola Rowland, called on government to urgently address the looming food crisis in the country by introducing price control mechanism to save the masses from imminent hunger.

The price of garri in the two markets has however, remained stable, at N300 per plastic measure, while the popular garri Ijebu, which is the most expensive, is sold between N600 and N650.

A rice seller at Owode market, Mrs Morakinyo Adeniyonu, said the closure of the nation’s borders and the coronavirus lockdown might have caused the upsurge in the price of rice in the market.

Mrs Abosede Adunlowo, a foodstuff seller at Akindeko market, Osogbo, said prices of food items had remained unstable in the last few months due to the coronavirus pandemic, compounded by the recent EndSARS protests across the country.

The traders appealed to government to help farmers, where necessary, in order to increase food production and, encourage the youth to go into farming to address food insecurity.

The situation was not different in Ekiti and Kwara, where residents, particularly housewives lamented the high cost of food items in the markets.

The market survey conducted in some markets in Ekiti showed an increase between 70 per cent and 100 per cent for some food items within two months, with traders and buyers calling for reduction in taxes as a way of bringing down prices.

According to them, the fast approaching Christmas and New Year festivities may be celebrated amidst uncertainties, unless something urgent is done by government to address the situation.

At the popular Oja Oba market and Bisi market, both in Ado Ekiti, a measure of white beans is now sold for N700 as against its former price of N300, while the brown specie that used to cost N500 is now N900.

NAN also noted that the prices of other food items, such as rice, yam, garri, onions, vegetable oil, millet, pepper, tomato and sugar, have also gone up in the market.

Mrs Susan Adeboye, a civil servant, said the sudden increase in the prices of food items without a corresponding increase in her monthly salary had impacted negatively on her purchasing power.

Mr Ayo Awosemo, a market leader and rice dealer at Aladetoyinbo Shopping Complex, Ado-Ekiti, described the development as unfortunate, stressing that it might continue unabated in the absence of necessary regulatory interventions by government.

However, Mr AbdulRazak Dauda, Secretary of Perishable Goods Association in Ilorin, Kwara, expressed optimism that tomato, pepper and onion would be in abundance during the harmattan season and their prices would be affordable.

A cross section of residents, who spoke with NAN in Ilorin, decried what they called astronomical rise in food prices in the last few months.

Mr Adebayo Micheal of Sabo-Oke area, Ilorin, lamented the hardship he faced in putting food on his family’s table, as essential commodities were fast getting out of the reach of the common man.

“Many people have resorted to buying what is known as broken rice, which is the least grade of milled rice, and even at that, a measure, which was sold for N300 before, is now N550, while a measure of guinea corn is now N400,”Micheal said.

A resident of Ilorin, Mr Sheu Ismail, with two wives, six children and a monthly wage of N50,000 said that survival for himself and his family was gradually becoming difficult.

A vulcaniser, Yakub Mohammed, who is a father of six, said it was indeed a trying moment now, adding that he had instructed his wife to cut down the daily food ration of the family.

All the stakeholders interviewed, called on government to further invest in agriculture and assist local farmers financially to be able to produce enough food items locally so as to subsequently force down prices.

Gowon Denies Looting ‘Half of CBN’ as Military Leader

Organised Labour Says Nationwide Strike Not Yet an Option Over Fuel, Electricity Hike