Kunle Afolayan has called out an overzealous film lover for watching a pirated copy of his newly released film, ‘Citation’.

In the trending tweet, the Twitter user with the handle @iam_Muideen critiqued the non French translation in the movie. Unfortunately, the observation pointed out that his source was clearly not Netflix as the platform is currently streaming a fully subtitled film.

It turns out Afolayan was in no mood to let the observation go and went ballistic. He tweeted, “You are a very stupid idiot. That’s what you get if you keep downloading films from unauthorized streaming platforms”. 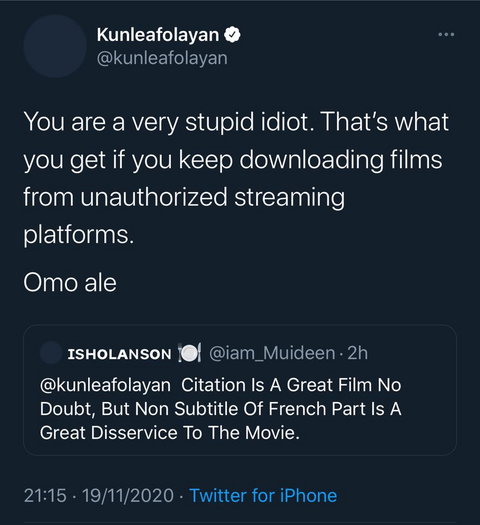 The unusual outburst by the seasoned film director comes in the wake of reports that pirated copies of the film is flying around the internet.

‘Citation’ follows the story of Moremi Oluwa (Temi Otedola), a 21-year-old postgraduate student who seeks justice after a sexual harassment experience. It debuted on Netflix on November 6, 2020.