Nigeria recorded the second largest reduction in deaths from terrorism in 2019, according to the 2020 Global Terrorism Index (GTI) report published on Wednesday, November 25, 2020.

The GTI report is produced by the Institute for Economics & Peace (IEP), an independent, non-profit think tank, using data from the Global Terrorism Database (GTD) and other sources.

The number of fatalities recorded in 2019 is also the lowest since 2011, according to the report.

The drop is credited to the reduction in deaths attributed to Fulani extremists, whose role in the farmers-herders crisis has been categorised as terrorism.

Overall, deaths from terrorism in Nigeria are now 83% lower than at their peak in 2014, and 59% lower globally.

However, main terrorist group, Boko Haram, and its main faction, the Islamic State West Africa Province (ISWAP), killed more people in 2019 than in 2018.

The Islamic sect was ranked as the second deadliest terrorist group globally in 2019 ahead of the Islamic State of Iraq and Syria (ISIS), and Al-Shabaab, and only behind the Taliban.

Of the four deadliest terrorist groups, only Boko Haram recorded an increase in the level of terrorism over the previous year.

Despite claims by the President Muhammadu Buhari-led government that the terrorists have been technically defeated, the number of deaths attributed to the group rose from 589 in 2018 to 737 in 2019, a significant 25% increase.

The country remains the third most-affected by terrorism across the world, a position it first assumed in 2015 after dropping from second place.

Afghanistan, which witnessed the largest drop in terrorism deaths in 2019, and Iraq also maintained their respective first and second positions in the latest rankings.

Two of the 10 most deadly terrorist attacks in the world in 2019 took place in Nganzai and Rann, both in Borno State, with a combined total of 130 deaths recorded.

Renewed activity by Boko Haram in Nigeria also extended to neighbouring countries, including Cameroon, Chad and Niger, where terrorism deaths linked to the group witnessed a significant surge.

The terrorist group reportedly maintained limited safe havens in parts of northeast Nigeria and on islands in Lake Chad despite the efforts of the Multinational Joint Task Forces (MNJTF) which operates in conjunction with the Nigerian military.

“Violence by the two main factions of Boko Haram have taken a large toll on the civilian population, particularly in northeast Nigeria, where continued attacks have internally displaced more than two million people and caused a further 240,000 Nigerian refugees to flee to neighbouring countries,” the report read. 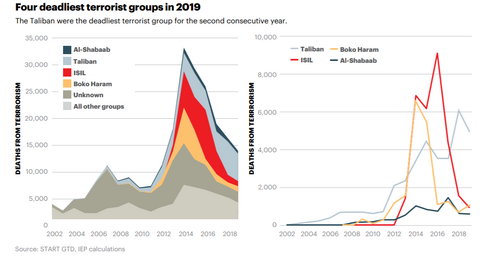 In Africa, Nigeria has incurred the largest economic impact of terrorism from 2007 to 2019 at $142 billion.

The economic impact of Boko Haram’s insurgency is reflected in the disorganisation of production, physical destruction of capital, and displacement of labour.

The GTI report noted that the violent attacks recorded in Nigeria in the first six months of 2020 was more than the total recorded in 2019, suggesting Nigeria might witness an increase in terrorism incidents in next year’s report.

63 countries across the world recorded at least one death from a terrorist attack in 2019, and 17 countries recorded over 100 deaths from terrorism.

Seven of the 10 countries with the largest increase in terrorism were in sub-Saharan Africa, with Burkina Faso recording 593 deaths, a 590% increase.

The economic impact of terrorism has fallen each year for the last five years, according to the GTI report.

ISIS also reportedly expanded its global reach across seven regions, with affiliated groups responsible for attacks in 27 countries in 2019.

41% of total ISIS-related attacks in 2019 occurred in sub-Saharan Africa, while 49 far-right terrorist attacks were also recorded in the West.

Okowa Rejoices With Atiku at 74

COVID-19: CBN Reaches out to Nigerians

Gov Uzodinma Wants Every Politician in South-East to Join APC