President of the Nigeria Football Federation (NFF) Amaju Pinnick has backed Super Eagles coach Gernot Rohr amidst calls for the sack of the German.

Rohr has been under pressure following Super Eagles failure to get a win over Sierra Leone in two legs in the 2021 Africa Cup of Nations (AFCON) qualifiers played during the most recent international break.

Despite the criticisms that have followed those two draws, NFF boss Pinnick has revealed that he and the federation still have faith in the German. 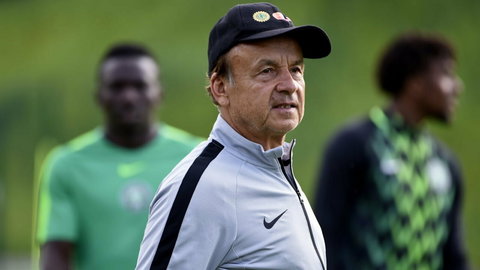 Rohr has done well as our coach, qualifying us for the World Cup and finishing third at the AFCON. It was the same coach who beat Argentina and drew with Brazil in friendlies,” Pinnick said during his appearance on NTA’s Sports Parliament on Saturday, November 21, 2020.

“He has our full support.”

Rohr has been Super Eagles coach since 2016 and has seen his initial two-year-contract extended twice.

His critics got louder after the Super Eagles squandered a four-goal lead to draw Sierra Leone 4-4 on Friday, November 13 and only managed a goalless draw in the return leg away in Freetown four days later.

Even Sports Minister Sunday Dare publicly questioned the competence of Rohr and added that Nigeria deserves better than the Franco-German.