Nigerian rapper Lil Frosh’s estranged girlfriend, Iyomaterire Okeoghene Taiwo has alleged that he threatened to kill her while there were still together.

The model made this known during a chat with media personality, Daddy Freeze.

He beat me up so bad…that was when he stripped me naked and he was like I’m going to post this on social media, i’m going to ruin your life. He poured water on me, beat me up, slapped me,” she said.

She accused the rapper of threatening to kill and destroy her and having Davido to get him out of it.

He threatened me and was like ‘do you think I cannot get away with anything? I’m going to kill you right there and you will just die for nothing because Davido is going to get me out of it. I will just kill you for nothing.”

It would be recalled that the rapper was called out by his girlfriend’s manager and brother back in October for assaulting his sister. 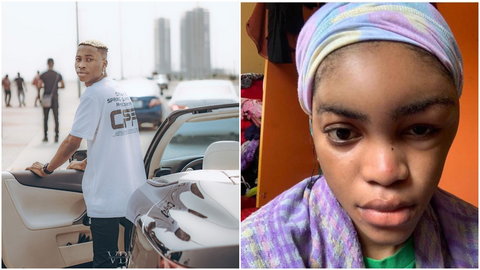 According to him, the rapper is alleged to have a thing for coming back to beg Camille after beating her.

Michael went on to share photos of the badly bruised face of Camille after she was allegedly beaten to a pulp by the rapper.

Following the allegation levelled against him, his now-former record label, DMW, terminated his contract.